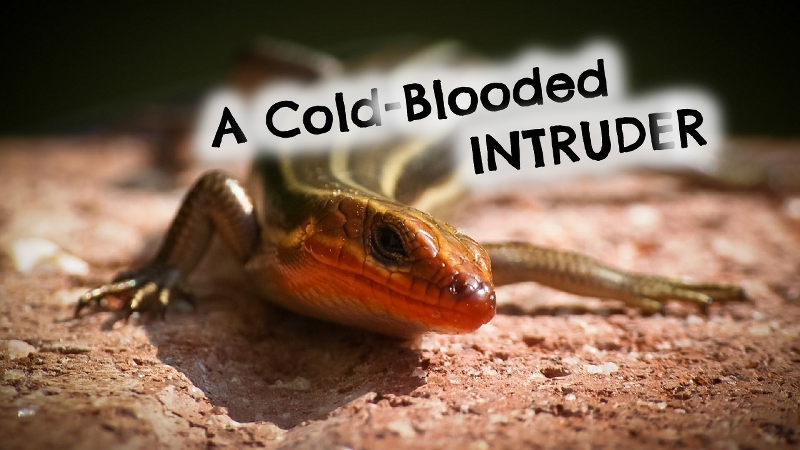 My beloved boy left the back door open this morning and unwittingly welcomed a cold blooded intruder into our house. Upon discovering the beady-eyed interloper, my son leapt into action and captured him inside a boot. Thankfully this particular visitor was only about 6 inches long and quite easily overpowered. With the trespasser safely contained, the whole family gathered to meet him.

My kids have acquired my fascination with God’s creatures and quickly did their best to make this unexpected visitor feel welcome. (Though I suspect this particular visitor would have preferred a slightly less enthusiastic welcoming committee.) We love animals (especially bacon!) in this house so when stuff like this happens we tend to drop everything for a few minutes and just enjoy God’s creation together.

This is a super easy way to guide kids, grandkids, neighbor kids, or even kids that climb on rocks on the journey of knowing and enjoying Jesus! This is something I’ve been asking God to help me do with my kids since my oldest was a baby and by His grace I’m growing in this area. (In fact, I recently got to co-author a book about it! You can download a FREE copy!) God helps us do this with our own kids plus lots of other kids we get to influence on a regular basis. He can help you too! Ask God to help you spread the wonder and delight of knowing and enjoying Him through creation! “But how can I do that?” You may ask. Good question! I’m certainly not perfect at it, but I can tell you about our morning meeting with Mr. Lizard and maybe that will give you some ideas to get you started.

“It’s a skink!” My beloved boy announced and proceeded to warn his sisters not to touch it as he transferred the lizard to a plastic container where it could be easily and safely viewed. This brings me to my first piece of advice.

Nature is marvelous, but sometimes it bites, stings, infects, poisons, or bruises those who get too close. Kids (and adults) who don’t know how to behave around nature are usually more likely to get hurt. We also don’t want our kids tormenting, crippling, or ingesting critters they find in the yard so we have told our kids how to behave around nature. This is a work in progress for us. (If you look closely at the picture above you’ll see the blur of my wife’s ninja-speed intervention that saved Mr. Lizard from a tragic encounter with the baby’s eager fingers.)

Now that we’ve dealt with safety concerns, I will reveal the secret of helping kids enjoy Jesus through creation. Are you ready!? Here it comes! We looked at the lizard and talked about it. Ta-dah! (And the crowd bursts into spontaneous applause.) That’s really all there is to it. Sometimes enjoying Jesus means sharing the wonder of a child who has caught a lizard in their boot. It’s not a complicated formula. In fact, kids often do this automatically. (I didn’t have to distribute invitations, make a formal announcement, or send up a flare to draw my kids into this experience. I was the slowpoke who arrived after they had already gathered to gaze in fascination at God’s critter.) All you have to do is recognize the opportunity to enjoy Jesus and go for it. Here are a couple more suggestions to get you started.

Listen to the kids. The little lizard in his boot might as well have been a mighty dragon, my son was so excited about his acquisition! “Can we take a picture and send it to someone!” He pleaded. So I snapped some pictures for grandparents and asked him to tell us about the lizard. “It’s a skink,” he told his enamored tot-sized audience. “They have teeth so you have to be careful. Its tail can fall off to help it escape from predators. It’s also cold blooded so that means leaches can’t find it to suck its blood.” (He recently learned that many leeches use thermoreception to locate prey.) My girls simply told me it was a cute lizard. I let all of them talk and asked them questions about what kind of skink they thought it was, what it liked to eat, and where it came from. They didn’t know the answers to all of my questions and quite frankly, neither did I, which brings me to my next nugget of wisdom.

Look it up with the kids. I knew people usually called this lizard a blue-tailed skink, but I recall hearing somewhere that this is not its real name. Our visitor also didn’t have a blue tail so I did what any self-respecting millennial would do. I whipped out my smartphone and googled “Skinks of Missouri.”

Don’t be embarrassed to show kids that you need to look things up. In fact, you could even say

“I’m going to have to look this up because I’m not a skink expert like God is. He knows everything about all the skinks in the world. He knows exactly what day this skink hatched from an egg, where he came from, and what he ate yesterday. God knows everything.”

(Not only does this point kids toward the Creator, but it also gives you time to swipe through your phone looking for pictures of lizards resembling the one in your house.) My kids enjoyed looking up skink facts and seeing pictures on my phone. We determined our intruder was a male five-lined skink. (So of course we had to pause and count his stripes. I’ll be honest, I counted way more than five lines, but I think it’s because I was reading between the lines.)

We didn’t actually have to google that last fact, but discovered it ourselves through an intricate method of scientific experimentation. (My little girls wanted to use their blocks to build a shelter for the skink, but he refused to enter it no matter how fancy they made it.)

It didn’t take me long at all to find these facts with my kids. Then I simply gave God the credit for His incredible handiwork. You can do that too!

Point the kids to the Creator.

Just give God the credit He deserves for making something so remarkable that even the most brilliant scientists in the world are unable to copy it. Here’s some examples of things you could say…

“Who made skinks? That’s right, only God is powerful and wise enough to make animals. When we see animals we can stop and tell God how incredible we think He is. Let’s do that together right now.”

“Wow! This lizard changes color as it grows up! This website says scientists believe this helps protect it from adult five-lined skinks who might attack it for trespassing on their territory. But since it’s a different color, the grown up skinks think it’s a different kind of lizard so they don’t attack it. God is a genius to plan for that to happen!”

“This lizard’s tail will fall off if a cat or bird tries to eat it. The cat or bird will be so busy watching the wiggly tail that the lizard can escape and grow a new tail later! God planned this on purpose! He created a perfect world, but He knew people would choose to sin and mess everything up with pain, disease, and death. Even waaaaaaaaay back then, God planned for this lizard to be able to defend itself from other animals that would want to kill it! If God puts so much wisdom and power into caring for a puny lizard, how much wisdom and power do you think He puts into caring for you?”

Did you notice the first example was shorter than the others? It’s ok to keep it simple, especially if you’re brand new to this. But my hope and prayer is that as you trust God to help you in this area, you will personally enjoy His creation so much that you will eagerly and naturally share more and more with kids. All you have to do is listen to them, look up some facts, and point them to the Creator!

Meanwhile, we have released Mr. Skink into the wild and he promptly crawled under our steps so perhaps we’ll meet again someday. Until then, we’ll keep enjoying Jesus through His creation and also probably repeatedly watch this fascinating video of a female five-lined skink caring for her eggs.