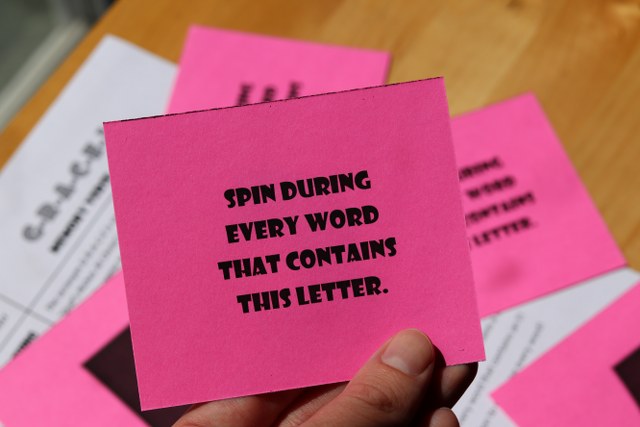 “Freedom isn’t free,” That’s a statement often said around Memorial Day, Veteran’s Day, or the 4th of July as we honor the courageous families who sacrifice so much to preserve our nation’s freedom. This same statement also rings true for grace. While saving grace is freely given to all who believe, it came at a great cost to Christ. The acronym G-R-A-C-E is sometimes used to define grace as “God’s Riches At Christ’s Expense.” You can use this acronym as part of a game to help kids learn about grace while also teaching them a memory verse about grace. 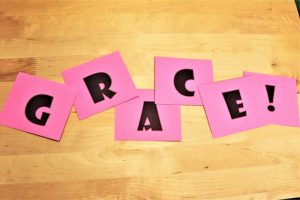 Write each letter of the word GRACE on a different small card. On the back of each card write a simple motion (such as clap, spin, or hop) for the kids to do while they say a memory verse. (Or you can save time by clicking here to download and print the FREE cards I’ve already made for you.) If you want to be independent and make your own, here are some recommended motions:

Suggested actions for each letter

· G = Clap during every word that contains a G!

· R = Stomp during every word that contains an R!

· A = Spin during every word that contains an A!

· C = Hop during every word that contains a C!

· E = Nod during every word that contains an E! 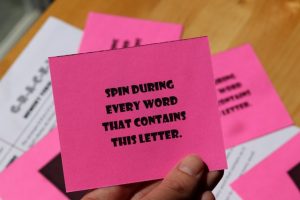 Once you’ve got the cards made, set the stage for this activity by saying something like this to the kids:

“Have you ever heard someone say, “Freedom isn’t free”? You may have heard someone say it on Memorial Day or maybe on the 4th of July. On those days we celebrate our country’s freedom and also remember the men and women of our military who bravely serve to protect our freedom. They work hard for us to be free and some of them have even died to protect our freedom. That reminds me of someone else who paid an expensive price for us to have grace.”

Arrange the G-R-A-C-E-! cards on a table or in a pocket chart so the kids can see them clearly. Have them say the word and spell it out loud together. Ask them to tell you what grace means and then point at each letter in turn as you say…

“People sometimes say grace is “God’s Riches At Christ’s Expense.” This means that God gives us his riches (good things we don’t deserve) because Jesus Christ paid the expensive price for our sin. Our sin makes us deserve to die and be far away from God forever, but Jesus paid the price for us to be set free from sin so we can be with God. Freedom from sin is a free gift from God for you, but it was expensive for Jesus. You don’t deserve it, but God gives it to you anyway. That’s grace! We’re going to learn a verse about grace.”

After you have taught the verse, the game is EASY! Simply write the verse on a whiteboard or print it on a page so kids can see it, then let them take turns flipping letters over and finding every word in the verse that contains that letter. Have the kids say the verse and do the action on the back of the card each time they say a word that contains that letter. (For instance, if the verse is Ephesians 2:8 the kids would say the whole verse and spin when they said the words EphesiAns, grAce, hAve, sAved, and fAith because they all contain the letter A.) To further emphasize what grace is, have the kids repeat the simplified definition of grace, “God’s Riches at Christ’s Expense,” in between each round of the game.

Take it a Step Further
Encourage kids to enjoy Jesus by thanking Him for grace. You could even challenge them to think of 3 specific times during the day when they can stop and say “Thank you!” to Jesus for paying the expensive price for their sin so they can freely enjoy God’s grace forever. Give them a headstart by helping them brainstorm times of the day when they could do this such as mealtimes, on the school bus, or maybe every time they see the letter “G”! Be sure to also let them know that you’re available to answer questions for anyone who wants to know more about what it means to believe in Jesus and be saved by grace.