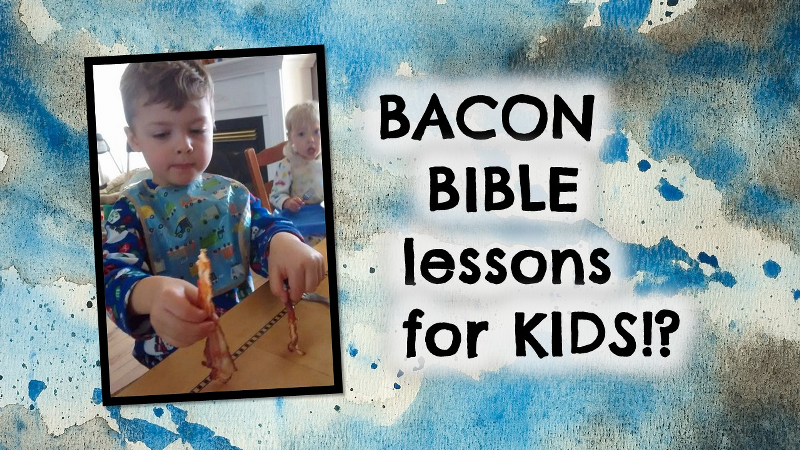 I’ve used many tools and resources to teach God’s Word to kids over the years, but had never considered adding bacon to my teaching arsenal. That is, not until a friend shared this picture of her bright boy using bacon to bring the Bible to life.

Can you guess what bit of basic Bible history is being reenacted by this brilliant boy’s breakfast?Look closely and you’ll see that the bit of bacon on his left is boldly facing off against the bigger bacon more than twice its size! I’d say the dining room table also bears a striking resemblance to the valley of Elah. It’s a bacon based version of David and Goliath. (Phil Vischer could probably make a killing with this idea…move over Bob and Larry, it’s bacon time!)

This preschooler, like kids everywhere, naturally learns through play so while it may look like he’s just playing with his food, moments like this are actually a super important part of building a child’s basic beliefs. Playing is a natural way for kids to express, review, and remember lessons from God’s Word.

“Current situation: 4 year old acting out Paul’s shipwreck in the bathtub. Except I’m not sure the occupants of the ship will make it in this retelling.”

A few days ago, yet another friend posted this on Facebook,

“I remember playing the story of Ehud and Eglon with my sisters. On our green futon. With couch throws to make us “very fat”. And a green plastic caterpillar for a knife. Works well that one sister is left-handed. And it was fun to bury the caterpillar in between pillows as the knife was swallowed by “fat”!

Don’t underestimate the importance of silly moments like this. (And maybe also double-check your toy box to make sure any green caterpillars contained therein are dull and harmless.) Play is so crucial to childhood development that it has been recognized by the United Nations High Commission for Human Rights as a basic right of every child. Playing was purposefully designed by God as a way for kids to discover and grow and it’s an incredible method for getting God’s Word to stick in their hearts and minds.

There are lots of ways to teach God’s truth through play. You can purchase official Bible toys online or at many Christian bookstores, but I usually prefer to engage kids’ imaginations with more organic materials such as… 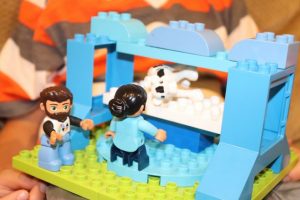 Blocks— Can you look at my son’s creation above and guess which story we recently covered in our Bible Time? (Hint: We just started 1 Samuel.) This even prompted conversations about Levitical law and Jewish culture (Partly because we had to dig through the block box for a toy heifer to replace the pig he’d originally placed on the “alter.”)

Sticks and Stones—Take kids outside and encourage them to recreate a recent Bible lesson or family devotion time using only stuff they find in nature. Then listen carefully as they describe how the twigs are actually Israelite spies climbing down the blade of grass to escape the fortified rock and mud walls of Jericho.

Stuffed Animals— My son used to pretend to teach entire Good News Clubs using only plush pigs and ponies as props for the lessons. My Princess will sometimes rename her plush puppies or unicorn “Amy Carmichael” or “Mary Slessor” after hearing stories about these missionaries. Have you considered adding a pile of plush animals to your next Bible time?

Playdough (or mud)—This is especially fun with lessons about creation! You can challenge the kids to make different kinds of animals. Be sure to join in—I’m sure they’d love to see you attempt to sculpt an East African Crowned Crane! (or a maybe a worm.) After they’ve made something, let them describe it and then talk together about how much harder it would be to create a REAL animal from NOTHING.

Art Supplies—My boy was really into drawing several years ago so we gave him a notebook and encouraged him to draw something in it every day that was related to our Bible time for that day. He loved it! 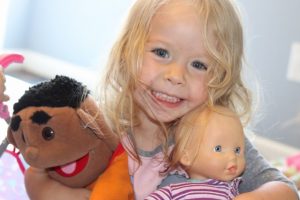 Action Figures or Dolls (or puppets)—My preschool Sunday School class really likes it when I bring dolls and let them help me act out the lesson. Each child gets to hold a doll and I tell them how to move it while I tell the story and say each character’s lines. It’s a blast! (Yes, I just admitted that I like playing with dolls.)

Hodge Podge—Just share a Bible lesson with your kids and let them use their own imaginations to find materials and recreate a scene out of Bible history.

Acting out or recreating God’s Word through imaginative play is more than fun, it’s fundamental! Your house is probably full of things you could use to engage in Bible play with kids in your home, Sunday School, or Good News Club. (For more ideas, check out this video.) What other ways have you found to help kids discover and enjoy the Bible through play?