How to Use Your Nativity Set to Teach Kids 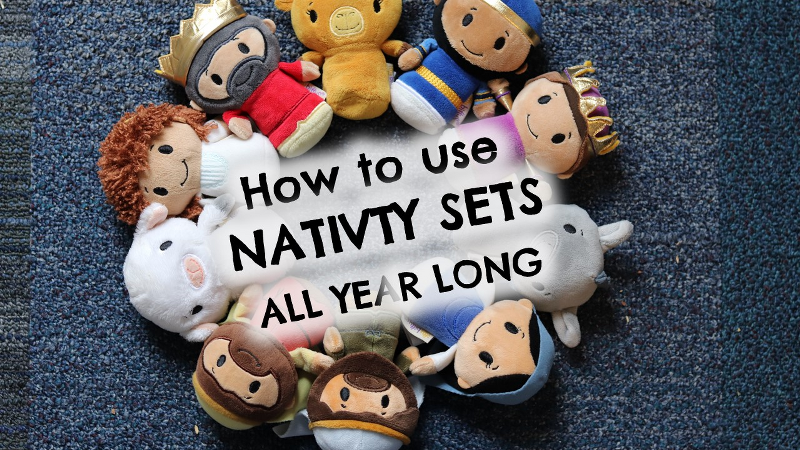 I just mix and match the characters and cast them in new roles. The kids in my pre-k Sunday School class love it! Since our nativity sets are kid-proof, the kids enjoy holding the characters and acting out the story with them as I tell it. Here are just a few ways you can incorporate nativity scene subjects into Bible lessons no matter what the season.
This may look like Mary and Joseph, but it’s actually Eliezar meeting Rebekah for the first time. She’s just about to draw imaginary water (glug, glug, glug) from an imaginary well to quench the thirst of his super thirsty camels. (Genesis 24)
This is no ordinary shepherd—oh no. This is the Good Shepherd searching for his sneaky lost sheep. (Baaaaaaaaa!) You can even hide the sheep in your classroom and let the kids search for it too! (John 10)
Mary and Joseph possess a broad range of acting skills! Here you see them playing the parts of Abraham and Sarah taking their herds (Mooooooooooo!) and everything else they own and travelling by faith to the new land God has promised them. (Genesis 12)
It’s super handy that the magi are often featured with crowns, but these aren’t wise men anymore. I’ve used the younger looking king as Josiah, the older guy as Uzziah, and the regally dressed dude who doesn’t have a crown works pretty well as the rich young ruler who questioned Jesus. (Luke 18)
To the untrained eye, this may look like a shepherd spying on a wise man, but it’s actually angry King Saul (he’s faking a smile cause he’s just that despicable.) hunting for David. (Shhhhh….David is hiding.) You can even let the kids take turns hiding David behind their backs while you march angry King Saul around the room to hunt for David. (1 Samuel 19)
Don’t forget to use the angel in your nativity set! The Angel could appear to Samson’s mom (who will probably look a lot like Mary) (Judges 13), deliver a super important message to Daniel (who, incidentally, happened to be a wise man. Now where could we find a wise man?) (Daniel 10), or even wrestle with Jacob and dislocate his hip like the angel in this picture. (Genesis 32)

Baby Jesus isn’t pictured because, as a toy baby in a houseful of little girls, his schedule is often filled with tea parties, sleepovers, fashion shows, and unicorn races. When available for public appearances, baby Jesus stars in the roles of baby Isaac, baby Samuel, and baby John the Baptist.

It’s easy to use your nativity set to have Bible fun with kids!

I just grab the characters I’m planning to use, put them in my mystery bag and reveal them one by one as I teach the lesson. Even if you have a nativity set that’s too fragile for kids to touch, you could still let them see it or even take pictures of the characters on your smartphone to show them. Can you think of other Bible Lessons these characters could fit into? Please share your ideas in the comments. I’d love to read them!