Louder Than a Jet Engine 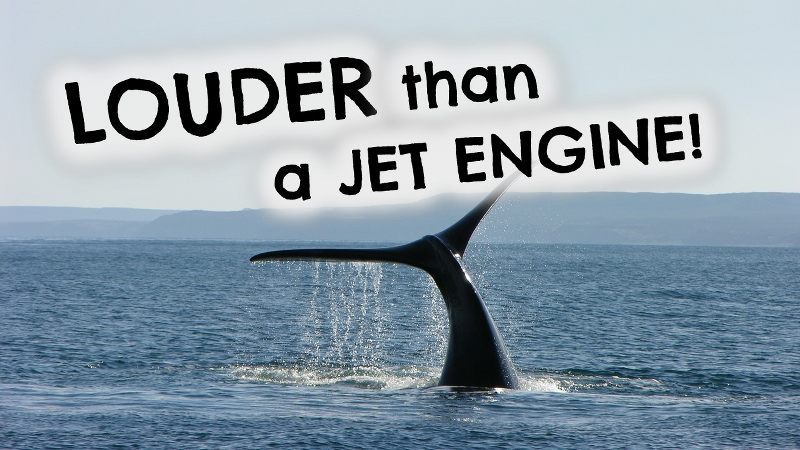 What animal is longer than a school bus, bigger than a dinosaur, and heavier than 25 elephants? Most kids can tell you the blue whale is well-known for its extreme size. But there are several lesser known facts about this gentle giant that will grip their attention and provide a natural opportunity to direct their attention to Jesus, the Creator and King of earth’s most epic animals.

So how do you use a massive marine mammal to magnify the majesty of our marvelous Maker? First, you can pique their interest with a few fun questions that will test their knowledge and arouse their curiosity. Simply read the statements below and have them clap if they think a statement is true or stomp if they think it’s false. (Of course you could just have them say “true” or “false”, but where’s the fun in that?) But first, it only seems fair that you should have to answer the questions yourself. (I can’t require you to clap or stomp to indicate a true or false answer, but I highly advise it–especially if you happen to be in a crowded area.) Give it your best shot before peeking at the answers.

Believe it or not, these statements are all true (Number five could potentially be false if you happen to have a kid in your class who weighs more than 400 pounds.) So, how do you use this information to guide kids on their journey of knowing and enjoying Jesus? All you have to do is tell them about the blue whale and point them to its wise and powerful creator. (If you’re like me, you’ll whip out your whiteboard marker and draw a picture of a blue whale while you say these things. If you’re not like me, you could always print and show the picture at the top of this article to help keep the kids’ attention.) You might say something like this:

“All of these things are true! The blue whale is the biggest and also one of the loudest creatures on Earth. A marvelous animal like this couldn’t build itself or happen by accident. It would take extreme wisdom to know how to make blue whales loud enough to communicate with each other when they’re hundreds of miles apart in the ocean. It would take awesome power to create such huge muscles and bones and put them together just right. Jesus is God and He has extreme wisdom and awesome power. The Bible says this about Jesus, “For by him all things were created, in heaven and on earth, visible and invisible, whether thrones or dominions or rulers or authorities—all things were created through him and for him.” Colossians 1:16 (ESV) You’ve probably heard about Jesus as a baby in a manger, but He is much more than that! He’s the powerful and wise God who carefully designed everything, including the tremendous tongue, huge heart, and super-sized sound of the blue whale! Jesus has always existed and He created the blue whale and everything else to help us understand how big his power and wisdom is. He wants you to enjoy getting to know Him by learning about the incredible things He has made–like big blue whales that are louder than jet engines!”

This takes mere minutes, but it can make a BIG impression on a child’s understanding and enjoyment of who God is. Of course I don’t always have lots of extra time to talk about blue whales and you probably don’t either. Maybe you already have a lesson planned and won’t have extra time for this entire activity. I totally get it! That happens to me a lot. You may need to pick just one fascinating fact about blue whales and use it to reinforce a spiritual truth the next time you teach about our awesome God.

You can emphasize the LOVE of Jesus.

“Jesus loves you and made you. He also made incredible animals like the blue whale. It’s so big that just its tongue weighs more than 100 of you put together! But you matter more to Jesus than all the blue whale’s in the world. He loves you!”

You can emphasize the POWER of Jesus.

“The disciples were amazed that even the wind and waves obeyed Jesus! There is nothing more powerful than Jesus. Even blue whales, the strongest animals on the planet, depend on the power of Jesus to give them life and provide for their needs.”

And that just scratching the surface. The wisdom, creativity, and sovereignty of Jesus could also be reinforced with this larger than life object lesson. Connecting spiritual truths with fascinating facts not only keeps the kids interested, it also helps them understand and appreciate the truth. You don’t have to become an expert, just do some research, discover for yourself how God displays His attributes through creation, and then plan creative ways to share the wonder of what you’ve learned with kids.

And just for fun, one last whaley cool fact. Did you know scientists use ear wax to figure out how old blue whales are? True story! Wax layers can be counted sort of like tree rings to determine a whale’s age. Just imagine, there are millions of other fascinating facts just waiting to be learned and shared with kids to help them know and enjoy Jesus! If you’re searching for ideas to help you get started, check out our e-book, “Enjoying God My Creator” for 70+ hands-on activities that use animals, plants, planets, Scripture, and the human body to point kids to their Creator.