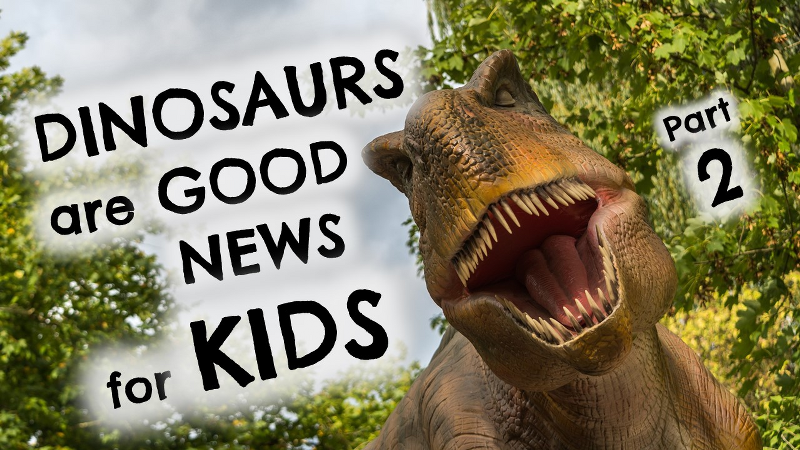 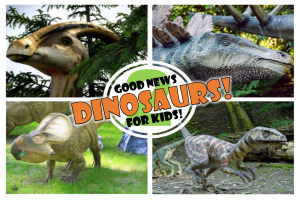 I’ll reveal the correct answers at the end of this article. (If you’re like me you’ll scroll straight to the bottom to see if you’re correct. Go ahead—just make sure you come back up here when you’re done.) Discovering stuff about dinosaurs is thrilling for folks of all ages. Dinosaurs are good news for kids because you can use the fascinating fossil facts you discover about them to enjoy Jesus with kids in your home, church, or neighborhood. The word DINO can help you remember how to use dinosaurs to enjoy Jesus with kids. In my last article on this topic, (You should totally click here and read it if you haven’t already.) I said that “D” stands for DISCOVER. Now we’re going to take a look at the letter “I” and explore some ways you can use your dino discoveries to INTRODUCE God’s Truth to kids.

I is for Introduce

Kids (and lots of adults…even “brilliantly talented and super good-looking” adults!) have short attention spans so before you launch into something as important as the Gospel of Jesus Christ, it’s a good idea to INTRODUCE the topic and get their attention with something interesting and familiar to them. What could possibly be more interesting than dinosaurs? (Dinosaurs with bacon!?) Let’s look at some ways you can do this. Most of these ideas are simple and quick, but you could combine several of them to create an entire Sunday School or family devotions lesson for kids.

You can simply ask “What’s your favorite dinosaur?” or “Do you like dinosaurs?” This is an easy way to break the ice and build relationships with kids. (It works especially well if you happen to be wearing dinosaur socks.) Let them tell you what they know or enjoy about dinosaurs and then ask, “Can I tell you something I learned about dinosaurs?” 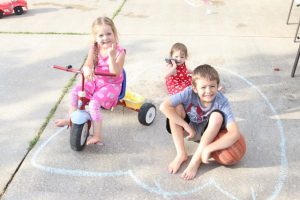 Obviously you won’t be unveiling a life-size Titanosaur model in your backyard anytime soon, but you can easily and cheaply show kids how massive this marvelous creature was by drawing life-size footprints with sidewalk chalk. Huge footprints over 5 ½ feet long and about 3 feet wide were discovered in Australia years ago! A grown man (or his kids) can fit in this footprint! Just take your chalk and a tape measure and make the same basic shape that I did. Then sit back and let the kids color it in. (Or ride tricycles in it!) If you’re indoors, you can use masking tape to do pretty much the same thing, it’s just a bit more tedious.

Real dinosaur fossils are slightly out of the average person’s price range, but fake ones are pretty easy to come by. The kids know my fossils are fake, but they think they’re super cool! It can be as simple as cutting a 9 inch T-Rex tooth from paper or as complex as procuring your very own Brachiosaurus toe-bone fossil replica. (Does anyone else have one of these? We could probably be best friends!) To make the tooth, just measure 9 inches of paper and make a sharp tooth-like shape. Or if you’ve got enough room and really want to wow the kids, you could even make cardboard bones that are 5 to 7 feet long to show them how big some sauropod dinosaur’s bones were.

It’s super easy to find free pictures of dinosaurs online. You can either print them or use your smart phone to show them to the kids. I’ve even put together some FREE flashcards with fossil facts and Bible verses to give you a jump-start. Click here to learn more. Just show the picture, have the kids guess what kind of dinosaur it is, and then share your interesting discoveries. (You can watch this video for a demonstration of what this looks like with an actual kid.)

Of course you can’t make actual size models of everything. (Believe it or not; transporting, storing, and displaying a 7 foot Ultrasaurus femur replica can be quite cumbersome, but NOT impossible.) That’s why I often use a tape measure. Let the kids help you measure out 3 feet (Triceratops horns), 25 feet (roughly the length of an adult Triceratops), or 20 feet (the height of a large T-Rex.) Show the children some dinosaur measurements as you share what you have learned about dinosaurs. 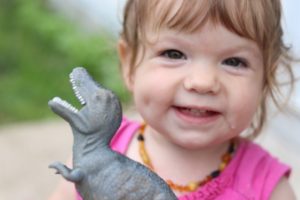 Many dollar stores have plastic dinosaur toys. And after you’ve used them in Sunday School, you can keep them in your office drawer and play with them during breaks! (I’m not the only one who does that, right?) Show the toy to the kids and have them tell you what sound they think that dinosaur made, then share what you have discovered about that kind of dinosaur. You can also use these toys for games, prizes, and team mascots!

There are lots of incredible dinosaur picture books out there. Most of them are loaded with evolutionary content, but you can still use the pictures to pique their interest in the God who designed dinosaurs. There are also some great books about dinosaurs written from a Biblical perspective. “Dinosaurs” by Ken Ham is one of my personal favorites. There’s even a new version for little kids! By the way, you will very likely encounter the topic of evolution when talking about dinosaurs with kids. Answers in Genesis has some great resources on this topic and I’ll talk about graciously dealing with the theory of evolution when we get to the letter “O” of our D-I-N-O acronym. 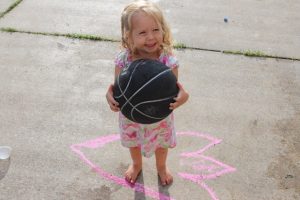 You can help kids visualize the size of dinosaurs by comparing them with familiar objects. For instance: Triceratops had a body the size of an elephant, T-Rex was about as tall as a giraffe and as long as a school bus, Compsognathus was as small as a chicken, Velociraptor weighed about as much as a preschooler, and Argentinosaurus (a huge long-necked sauropod dino) was longer than 2 school buses, but its eggs were probably just a bit bigger than a basketball.

Putting the Pieces Together

Simply enjoying God’s creation by marveling at His creative design of dinosaurs is a great way to enjoy Jesus with kids! But you can also take it a step further by intentionally praising God for his epic creation and pointing kids to God’s Word. For example, you can say something like:

“Did you know the name Tyrannosaurus Rex means “Tyrant Lizard King”? It’s easy to see why people call this dinosaur the king of the lizards. It was as tall as a giraffe and as long as a school bus. Its teeth were bigger than my hand. Can you show me how big your teeth are? T-Rex was an incredible animal! But it’s not really the king of the dinosaurs—Jesus is! The Bible says, “For by him all things were created, in heaven and on earth, visible and invisible, whether thrones or dominions or rulers or authorities—all things were created through him and for him. And he is before all things, and in him all things hold together.” [Colossians 1:16-17 ESV] This means Jesus is king of everything in the universe! He created T-Rex and all the other animals. He created people and planets too! Everything would fall apart if Jesus stopped holding it together with His awesome power! He’s the king of the universe, the king of my life, and king of the dinosaurs. Jesus is awesome! Would you like to know more about Him? He cares more about YOU than all the dinosaurs that ever lived.”

This is just one example. The Bible has many verses that declare all creatures (which would obviously include dinosaurs) are evidence of God’s wisdom and power. Here are some more verses you could use to help kids see that T-Rex and Triceratops are reminders that God is awesomely big and strong and totally worth getting to know.

You don’t have to preach a full-length sermon. Just introduce the concept of God’s awesomeness by talking about dinosaurs, quote/read a verse that honors God as the creator, and simply marvel out loud about how awe-inspiring God is. Together you can thank God that you can enjoy His awesomeness by discovering dinosaurs. For more info about using incredible animals to magnify the awesome attributes of God, check out this article.

And speaking of awesomeness, in the next article in this series we’ll talk about the letter “N” and how you can use dinosaurs to share the most awesome news in the universe with kids! If you subscribe to our blog, you’ll be one of the first to know when it’s done! (Hint! Hint!)

P.S. The dinosaurs in the picture at the top are Parasaurolophus (top left), Stegosaurus (top right), Protoceratops (bottom left), and Velociraptor (bottom right). I’d love to hear how many you guessed correctly!